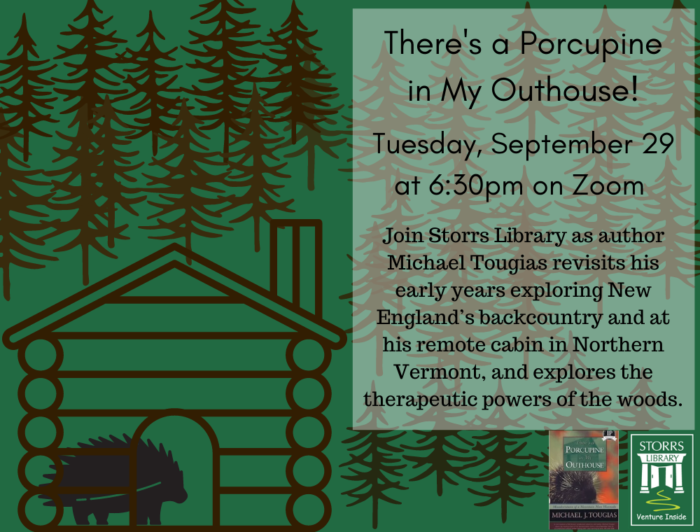 Storrs Library presents Michael Tougias and the outdoor humor from his book, There’s a Porcupine in My Outhouse! Based on misadventures on his early years exploring New England’s backcountry and at his remote cabin in Northern Vermont, Tougias will revisit his first disastrous trip to his newly bought cabin; the history of Outhouses; encounters with bear, moose, fishing spiders and porcupine; and the history of Mountain Men.  We’ll special places in Vermont’s Northeast Kingdom, Northern NH, and Northern Maine, and explore the therapeutic powers of the woods.

Michael Tougias is the author and co-author of 30 books including The Finest Hours which was made into a major motion picture by Disney.  Some of his other books include So Close To Home (about the first Uboat to enter the Gulf of Mexico), Above & Beyond: JFK and America’s Most Dangerous Spy Mission,  Fatal Forecast: An Incredible True Tale of Disaster and Survival at Sea, Ten Hours Until Dawn: A True Story of Heroism and Tragedy Aboard the Can Do, Rescue of the Bounty, King Philip’s War, The Blizzard of ’78, Quabbin: A History and Explorers Guide,  and several other books.  He can be visited on the web at michaeltougias.com.

Come and enjoy a night of fun and odd nature experiences!

Families in Harmony with Renee Coro